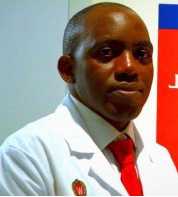 Esene Ignatius Ngene received his Research Assistant (MD Thesis) and Physician Jan 2005-Dec 2006. he was -Medical officer, Ndop District hospital Jan. 2007-Sept. 2008, He completed his Residency/M.Sc in Neurosurgery at Ain Shams University (ASU)Hospitals in Sept. 2009-June 2013. He got his Doctorate Degree in Neurosurgery Research Associate, Cairo Gamma Knife Center, Egypt in Sept. 2013-June 2017. He did Internship at Children Cancer Hospital, Egypt in Aug. 2012- Mar. 2013. He was appointed as Chief Resident Department of Neurosurgery, Ain Shams University Hospital Egypt in 2016-2017. He was Research Associate (NIH StrokeNet Work) and Clinical Observer in Operating Room and Out-patient Units of Department of Neurosurgery, University of Wisconsin Madison, USA in 2016-2017. He is working as a Consultant NeuroSurgeon,  Ministry of Public Health, Garoua Regional Hospital, Cameroon. He is Co-Chair of the Young Neurosurgeons Forum of the World Federation of Neurosurgical Societies (WFNS) (2019). He is  Chair of the Young Neurosurgeons Committee of the Continental Association of African Neurosurgical Societies (CAANS) (2018). He is the Member, Neurotraumatology, Committee of World Federation of Neurosurgical Societies (2017). He is the Member of the Cameroon Red Cross Society (since 2001). He is the Member of the National Medical Association of Cameroon (since 2005).

He was awarded as NIH StrokeNet & Foundation for International Education in Neurological Surgery). He was awarded as Boarding Grant to participate in the “World Congress of Neurosurgery”. Istanbul, Turkey.

He was Boarding and Accommodation Grant to participate to the 9th Saudi Association of Neurological Surgery (SANS) Annual Meeting on March 3-5, 2015. Sheraton Dammam Hotel, Kingdom of Saudi Arabia.

He was awarded as Boarding Grant to participate in the “International Basic Neurosurgery Course III on “Peripheral Nervous System and Spine” by the Turkish Neurosurgical Society.Antalya, Turkey. He got Scholarship from Prof. Madjid Samii/World Federation of Neurosurgical Societies-Africa 100 for Doctorate Degree in Neurological Surgery