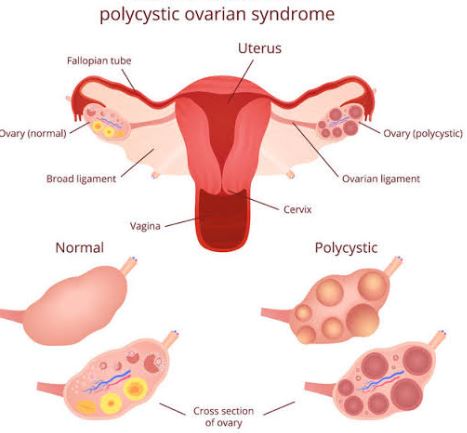 Polycystic ovarian Syndrome is one of the most common disorders among the women of reproductive age. Women suffering from PCOS present with menstrual disturbances and excess of androgens which may affect their reproductive life and quality of life at the same time .women with PCOS may be at increased risk of having multiple morbidities, which include obesity, type II Diabetes mellitus, cancer, cardiovascular disease, infertility and psychological disorders. The pathogenesis of PCOS still remains unclear. More and more supplementary studies needed to make a correlation between several factors that might play an active role in the pathogenesis of PCOS.

This mini- review summarizes all morbidities related with this disease and it also emphasizes on the various modalities of treatment of this disease, which are currently used in the management of this multidimensional disease. Polycystic Ovarian Syndrome (PCOS) also known as stein Leventhal Syndrome or hyper androgenic anovulation (HA). (Evans and Riley, 1958) It's also one of the most common endocrine system diseases which DÙˆÙ´ects women during their reproductive age. Evidence based on twin’s family study indicates the strong relation between genetic factors and PCOS, however its exact etiology is unclear and PCOS is recently thought to take origin from complex interaction of genetic and environmental factors together. PCOS associated with multiple metabolic dyscrasias and half of the women with PCOS are obese PCOS also associated with fourfold increased risk of type 2 diabetes mellitus PCOS is a multi-headed monster, which is a key challenge in the management of this disease, there are following elements should be considered.

Update on polycystic ovarian syndrome will contribute to the progress of research and development of interest and activities in the novel findings in clinical picture of PCOS and Novel treatment methods, which can relieve the women with PCOS from this complicated disease.